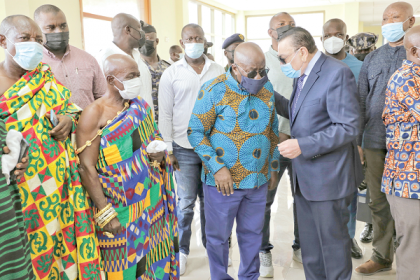 Construction works on the Ashanti Regional Hospital, located at Sewua in the Bosomtwe District, is nearing completion, Mr. Farouk Amer, Resident Engineer of Messrs. Euroget De-Invest, the contractors, has said.

The facility is about 90 per cent complete, with the physical works expected to be finalized by the end of this year (2021), according to the Resident Engineer.
He was briefing the President, Nana Addo Dankwa Akufo-Addo, during an inspection of the project, which is expected to reduce pressure on the Komfo Anokye Teaching Hospital (KATH), Ghana’s second-largest health referral facility.
On completion, the Hospital will be fully equipped with an intensive-care unit, operation rooms, delivery suites, gynaecology ward, sterilization department and medical gas plant for the production of medical gases.
Other facilities encompass a sewage treatment biogas plant, water treatment plant, power station and maintenance department.
Mr. Amer told the President that the contractors were determined to complete work on the Regional Hospital as scheduled to enhance healthcare delivery.
The project is one of the health facilities being undertaken by Messrs. Euroget De-Invest across the Region to ease congestion at the KATH, while ensuring accessibility to healthcare delivery.
President Nana Akufo-Addo is in the Region on a four-day working tour to interact with the people, and also inspect ongoing development projects.
On his visit to Bekwai, on the third day of the tour, the President inaugurated the Bekwai Office of the National Health Insurance Authority, and made a stop-over at the completed Bekwai Hospital to inspect the project.

Poor access road and the lack of utility services could delay the inauguration of the 250-bed Ashanti Regional Hospital sited at Sawua in the Bosomtwe District, engineers working on the project have warned.
The absence of power and water from non-backup sources and telephone infrastructure, in addition to the bumpy and dusty access road, which currently does not have the complementary drainage system, appear to detract from the decent physical infrastructure and the careful layout of the facility.

Otherwise, the main physical infrastructure and the installation of equipment are almost done.
The project is said to be about 98 per cent complete and tentatively scheduled to be handed over by November this year, but currently runs on what were intended to be backup power plant and water system.
The engineers said the undone 1.2-kilometre access road and the complementary drainage system were also delaying the completion of a final component of the sewerage treatment system.

The Site Engineer, Mr Amer Farouk Mahmaoud Amer, made the disclosure when he joined the Chairman of Euroget De-Invest, Dr Said Deraz, to usher President Nana Addo Dankwa Akufo-Addo around the facility yesterday as part of his tour of the region.

Euroget De-Invest, an Egyptian investment company, is constructing the hospital and eight others for government across the country.

Mr Farouk said even if the project was handed over today, accessing the facility would be difficult.
The President is on a four-day tour of the region, and yesterday’s visit of the hospital site was part of the inspection of a number of projects, including the Bosomtwe and Ohwiamase-Twedie roads.
The facility has 43 medical and non-medical buildings, a 60-kilometre internal road network, 10 theatres, dental, orthopaedic, urology and andrology specialist clinics, and a 36-body capacity mortuary.
It also has a 20-unit staff accommodation, a 150-car park, an ambulance station, and housing for lactating mothers, with the infrastructure sited on a 12,500 square-metre area.
It is equipped with sophisticated machines that will enable it to also serve as a referral centre, with the laboratories, pharmacies and other complementary services making it a complete healthcare service destination.