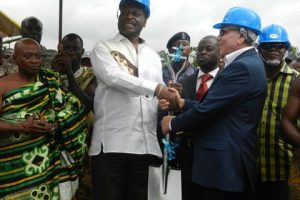 Congestion at the Komfo Anokye Teaching Hospital (KATH) in Kumasi is expected to ease with the construction of five additional health facilities in the Ashanti Region.

The former Board Chairman of KATH says residents and others would be presented with several options in choosing health facilities when the five health infrastructure projects are completed.

The Ghana government, with the support of Egyptian-based Euroget Investment De SA, is constructing nine health facilities across the country at a cost of US $339 million. Five of the facilities are located in the Ashanti region.

Work is progressing steadily at the Tepa and Bekwai district hospitals while a 500-bed capacity Military Hospital at Afari is 25 per cent complete. Construction is yet to start at the Sewuah Regional Hospital and the Kumawu District Hospital.

The Bekwai District Hospital for instance has unique features which include the production of oxygen internally for medical use.

Project Manager at the Ministry of Health, Richard Dadey, revealed work on the 190-bed capacity hospital whose construction started in 2010 was put on hold because of funding constraints.

The construction of the facility was in fulfillment of an election promise made by the late Professor John Evans Atta-Mills during a campaign tour of the area ahead of the 2008 polls.

Baring any hitches, work could soon start as the Health Minister, Dr. Agyemang-Mensah, announced a funding package would soon receive cabinet and parliamentary approval for work to resume.

That notwithstanding, about 40 million dollars would be needed to complete the entire project, including equipments.

“It [project] comes with housing for staff. We also have covered walkways linking all buildings so that you can move patients from place to place. Beyond that; all the waste from the hospital is treated and come out as clear water. The by-product would be some gas that we can use for lighting or cooking”, Mr. Dadey explained.

The people of Tepa and its environs would have a sixty-bed facility to be situated on 28-acre land at an estimated cost of 18-million dollars.

Expected to be completed in August 2016, the project comes with water treatment plant and sewage treatment plant which will generate biogas for medical use and a ring-road.

Resident Engineer, David Brown said the project is about 50 per cent complete.

Dr. Agyemang-Mensah, who has been touring the Ashanti region, told Nhyira News he is impressed with level of work at Bekwai and Tepa District Hospitals which are about 80 and 50 per cent complete as well as the Military Hospital at Afari in the Atwima Nwabiagya District in Ashanti region.

He is hopeful congestion would be a thing of the past at the only teaching hospital in the region as facilities are evenly distributed.

According to him, residents seeking healthcare will have a pool of facilities to choose from for improved services.

Meanwhile, Group Chairman of Euroget Investment De SA, Dr. Said Deraz has assured the company will work within timelines to ensure the completion of the projects in 2016.

“We hereby assure the completion of the all the nine hospitals before the end of 2016. We have substantially prepared this project on technical, managerial, supervisionary and financially and to confirm our commitment and our readiness for its completion”, Dr. Deraz told a project site handing over ceremony at Sewuah in the Bosomtwe District of Ashanti Region.