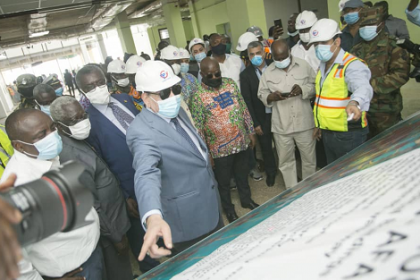 The Chairman and Chief Executive Officer of Euroget De-Invest, an Egyptian capital investment company constructing the new 500-bed military hospital at Afari in Kumasi, Dr Said Deraz says works on the project are 85 per cent complete.
According to him, major parts of the project would be handed over to the government in November and that the entire project would be completed in March 2021.

DEVTRACO THE PELICAN
He mentioned the OPD, wards, casualty/emergency unit, and various clinics as the parts of the project so far completed.

Dr Deraz and the project’s Resident Engineer, Mr Abou Shamaa, made the remarks when President Akufo-Addo toured the project site on Monday, September 28, 2020, as part of his working visit to the Ashanti Region.

He explained that equipment and fittings for the remaining 15 per cent work to complete the entire project had arrived in the country and that key parts of the materials had been moved to the project site.

Dr Deraz said when the company hands over the facility to the government, it would take between two and four months to train the end users on how to operate the equipment, explaining that by the time the training was completed, the full hospital would have been completed.

He, however, mentioned government’s tax policies, changing of project sites, difficulties with its first civil subcontractor, as well as the impact of COVID-19 which caused a temporary closure of the site as part of the reasons for the delay of the project.

DEVTRACO THE PELICAN
President Akufo-Addo expressed satisfaction with the work done and charged the contractor to finish the project as scheduled.

The Afari military hospital is one of nine hospital projects being constructed by Euroget De-Invest across the country. Two of the hospitals— Wa Regional Hospital in the Upper West Region and the Ga East Municipal Hospital in Kwabenya in the Greater Accra Region have already been completed and handed over to the government.