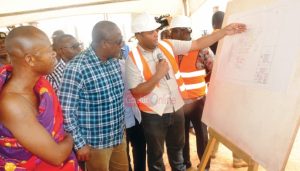 President John Dramani Mahama yesterday inspected work on the Tepa District Hospital project and said there was  no turning back on the government’s transformation agenda.

He said infrastructural development, which is a key component of the transformation agenda, was on course with the rural areas as major beneficiaries.

He was speaking at a durbar organised in his honour by the Tepa Traditional Council just before he inspected the hospital project at the end of his two-day visit to the Ashanti Region.

Work is progressing steadily on the 60-bed project, which is expected to improve access to healthcare in the area.

President Mahama, who was on a two-day visit to the Ashanti Region, had on the first day, cut the sod for the commencement of rehabilitation work on some cocoa roads in the region

Mr Mahama announced that the Tepa-Goaso trunk road which had been in deplorable state for a long time, had been given on contract by the government for reconstruction.

The 45-km road, which passes through towns like Acherensua, Hwidiem and Nkaseim, is of enormous economic importance since it serves as a link between the Ahafo area and other urban centres. However, it had been neglected over the years.

Mr Mahama also mentioned  the Tepa-Bormaa and Subriso-Fante roads as some of the projects that would be tackled under the cocoa roads rehabilitation programme.

To ensure that initiated projects would be completed, President Mahama said he would not restrict his duties to Accra, but would often move to the regions to have first-hand information about the projects.

President Mahama also said the government would collaborate with the Kwame Nkrumah University of Science and Technology (KNUST) for the establishment of an Institute of Jewel Technology at Tepa.

The promise was in response to a statement by the Omanhene of the Tepa, Nana Adusei Atwenewa Ampem, that he had allocated 40 acres for the proposed project and was looking up to the government to take it up from there.

Nana Ampem thanked the President for appointing a citizen of the area as regional minister; the first in the history of the district.

He also said there was no doubt about the commitment of the President to the development of  the Ahafo-Ano North District, and pledged the support of the chiefs and people of the area to him and his efforts to develop the nation.

Nana Ampem appealed to the government to provide an additional boys’ dormitory for the Tepa Senior High School to meet the growing student population.

The Ashanti Regional Minister, Mr Peter Anarfi-Mensah, said the government had done a lot for the district, and expressed the hope that “when the time comes, you will not forget the President and his party”.