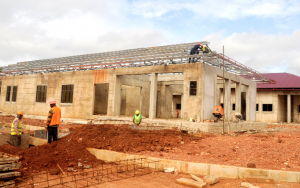 The public will have partial access to the hospital by the end of this year, a ‘soft’ opening is expected to take place.

The partial access means work on the two administration blocks and the outpatient department (OPD), the main entrance which includes paving and landscaping will be ready for use by the public.

This came to light when a team of engineers for the project conducted journalists round the facility.

They took journalists round the administration block, the outpatients department, inpatient ward, pharmacy, physiotherapy, laboratory and blood bank building, radiology, surgical suite, as well as the emergency and casualty wards and the ambulance station, where work was intensely going on.

Workers were also seen busily doing their jobs at the reproductive healthcare area, which includes the delivery suite, maternity and child, the 14-bed obstetric and gynaecology ward, sick babies unit and premature babies unit, during the visit.

Work on the hospital has reached various stages, including roofing, for the administration block and outpatient department, while at some areas, it had reached the ceiling, plastering and tiling stages. Electrical works and painting were also seriously going on.

The Administrator of Euroget De-Invest, Mr Baba Anaba, told the media that the hospital was a national asset and must be seen by all as such.

He said it was worrying that such a facility that would take care of the health needs of people, irrespective of which political divide they belonged, was being politicised by some people.

Mr Anaba said on completion of the super structures, Euroget would equip the facility with all the needed equipment before it would hand it over to the government of Ghana under a turnkey agreement.

He said he was very happy that the hospital would also provide jobs for many people, and thereby contribute to the growth of the community in particular and the nation in general.