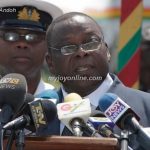 Government has signed a 180 million dollar facility for the construction of a 500 bed capacity Military Hospital in Kumasi.
The project which will begin next month is expected to be ready in 42 months.
According to Defence Minister Mark Woyongo, the military hospital when completed will be opened to the public and serve the populace, especially in the northern sector of the country.
The Defence Minister told sub-contractors working on the project- M-Babarsorti and Sons- to do a good job and give the project the utmost attention required in order to meet the deadline set for completion.
“Payment in this case is not going to be a problem so there should not be any delay,” he said.
“We hope like the 37 Military Hospital it will be opened to our civilian brothers and sisters,” he added.
The Chief Executive officer of EUROGATE, the construction firm overseeing the project Dr. Said Deraz told the Defence Minister the project will be completed ahead of schedule.
An agreement of the project was this afternoon signed at the Defence Ministry.