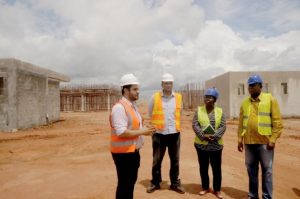 The undue pressure on most health facilities in the Ashanti Region is expected to end when work on the 250-bed district hospital at Sawua in the Bosomtwi District in the Ashanti Region is completed and handed over to the government by the end of this year.The construction firm, Euroget De-Invest, is building the $64 million hospital, using the most modern technology that will ease the burden on other hospitals and serve the over 4.7 million inhabitants of the region.

The Resident Engineer of the project, Mr Ahmed Aly, conducted the media round the hospital facility at the weekend.

He said, “We have made a lot of progress and we are very much on course to deliver the project on schedule.”

Work is 70 per cent complete

Mr Aly said the project was structurally 70 per cent complete and explained that the structures that made up the hospital had virtually been completed.

Artisans and engineers could be seen working to install the steel thrusters on which the roof would be attached.

He said 99 per cent of the over 250 staff, both engineers and artisans were Ghanaians.

Engineer Aly added that technology was being transferred through the works there to afford the young Ghanaian hands-on experience.

Accompanied by other personnel at the site, he said the facilities, especially the equipment that would be used at the hospital, were on high seas and would berth very soon to be fixed to complete the work for the people to benefit from quality health care.

A distinctive feature of the construction is that the project includes accommodation for over 150 health personnel, especially medical doctors and nurses, so that they would be close to the facility to ensure their expertise was easily available.

There are also facilities to accommodate mothers whose children would be on admission at the children’s ward.

Touching on the challenges, the engineer said the onset of the rains slightly affected the pace of work but that some adjustments had been made to ensure the timely completion of the project.

Among other steps, he said was a day and night work shift that had been adopted.

The Administrator of Euroget De-Invest, Mr Baba Anaba, spoke to journalists and said: “You have seen the project for yourselves and you are in a better position to present the true picture of what is actually happening on the ground.”

”The site is not weedy, there are structures here, work is ongoing and the place has not been shut.

We at Euroget believe in quality work and even though we want to finish the project on schedule, we will not compromise on the quality of work,” he assured.

He said Euroget remained committed to presenting the people of Ghana with hospital facilities that were of the best standards.

Euroget De-Invest will provide the structures, equip and furnish them under a turnkey agreement with the government, he added.