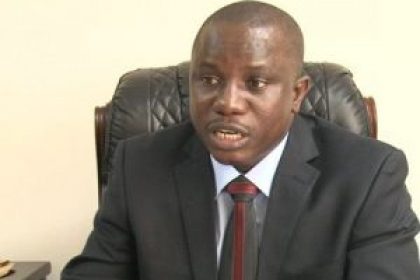 The Minister of Defence, Dominic Nitiwul, has directed Messrs Euroget De-Invest SA Group, contractors working on the 500-bed Military Hospital project at Afari in the Atwima-Nwabiagya District, to ensure completion of the project by May, 2018.
“I am giving you up to six months to put all finishing touches to this project. We need it to augment emergency healthcare delivery in order to save lives,” the Minister noted.
The project initiated three years ago, was expected to have been completed in September, this year. However, due to technical issues including redesigning of some of the facilities, it could not be finished as scheduled.
Mr. Nitiwul, who was inspecting the progress of work at Afari, as part of a day’s working visit to the Ashanti Region, reminded the contractors of the strategic importance of the edifice to the nation.
He was accompanied by Major-General Obed Akwa, the Chief of Defence Staff, Air Vice-Marshall Maxwell Nagai, the Chief of Air Staff, Brigadier-General Cosmos Alhassan, General Officer Commanding the Central Command, and other high-ranking members of the Ghana Armed Forces (GAF) Command.
The Hospital, the nation’s second largest military health facility, makes provision for a helipad, mortuary, audiology and dermatology unit, as well as ear, nose and throat clinic.
It has eight major operation rooms, 54 staff housing units, out-patient and in-patient departments, dentistry, obstetrics and gynaecology units, while providing diagnostics and laboratory services in emergency healthcare.
Earlier, the Minister had inspected the Old Uaddara Barracks to assess the abandoned 42 staff housing units, which had been left unattended to for about four decades now.
According to the Engineering Squadron Unit of the Fourth Battalion Infantry Brigade, about 60 per cent of the projects were at the lintel level.
Mr. Nitiwul said the government was working around the clock to ensure the continuation of all abandoned military projects.
He expressed worry over the state of accommodation facilities at the various garrisons, saying they did not befit the status of an army noted for their high standards and good record abroad.
“Our gallant officers and men deserve better conditions of service, and the government is doing just that to boost their morale,” he assured.
Mr. Islam Sharawy, Resident Engineer for the project, disclosed that they had executed about 70 per cent of the general works on the facility.