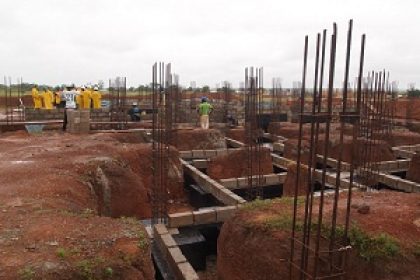 Euroget De-Invest s.a., a member of the Euroget Group of Egypt, has been awarded the contract to undertake the second phase of a turn-key project for a 500-bed Military Hospital in Kumasi.

Last week, the Ministry of Defence, representing the Government of Ghana, signed the contract with the company for the project which is to be completed at the cost of US$180 million.

The second stage includes the construction of electro mechanical external work, public health service department and staff housing, which had been sub-contracted to M. Barbisotti & Sons by Euroget De-Invest s.a.

On completion, the military hospital in Kumasi would be the second biggest military facility in Ghana, after the 37 Military Hospital.

The project had been on the drawing board for some years now until the government decided to finally bring it into fruition.

It is expected to serve the Ashanti, Brong Ahafo, Northern, Upper East and Upper West regions, as well as neighbouring countries.

Work on the first phase has already been completed and approved by the ministry. It involved the designing, engineering and specifications for the project.

The third and final phase of the project will be the provision of medical and non-medical equipment. The process for procurement, installation, training and maintenance for the phase is currently underway.

On March 20, 2014, the official sod-cutting ceremony will be performed at Afari in Kumasi for construction work to begin on the second phase.

The construction company has 42 months to complete the project.

At the contract-signing ceremony in Accra, the Minister of Defence, Mr Mark Owen Woyongo, stated that the military command and the government took great interest in the project because of the enormous benefits to be derived from it.

He gave an assurance that everything would be done to ensure that the contract specifications were carried through successfully.

Mr Woyongo advised the contractors to move to site immediately and commence work, and added that once there was no problem with funding, the contractors should be motivated enough to work and complete work on or before schedule.

The Chief Executive Officer of Euroget De-Invest,  Dr Said Deraz, gave an assurance that the company would work to meet expectations.

He said the company had built a huge reputation over the years and would further underline this by meeting the deadline with quality work.

Present at the ceremony were other executives of Euroget De-Invest s.a. and M.Barbisotti & Sons Limited.