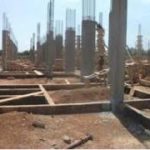 Euroget De Invest s.a, a Multinational Company involved in the Construction of a number of health facilities in the Country has assured the government and people of Ghana of their commitment to complete the contracts on schedule despite a few Challenges.

He said all the designs for the Projects have been completed likewise the Engineering and Specifications for all the Nine Hospitals.

On funding, Euroget mandated Barclays Bank Plc, U.K and Absa Capital South Africa to raise funds from the International Market. A strict payment procedure will be applied to the Contractors and strictly approved by the Project Implementation Unit of the Ministries of Health and Defense.

The chairman also indicated that, procurement for road infrastructure and utility services are ongoing. ‘We are in the process of procuring the medical equipment and non-medical furniture which have been slated for third phase of the Project’

Explaining, why the Projects seem to have delayed, the CEO said Cabinet and Parliament approved the Project in 2008. In 2010 for both the Ministries of Defense and Health signed the Commercial Contracts but due to bureaucracies in the system, It could not be started on time. For instance they encountered difficulties over financing guarantee issued by the Ministry of Finance as it did not conform to International Standards. Also they had to change Sites for some the Projects from time to time.

Euroget is currently working on the tax exemptions together with the government to ease financial encumbrances and help the local and International Contractors to execute the Projects in good order and time. The execution of this Project has created hundreds of jobs for Ghanaians and when completed will facilitate access to health and improve the livelihood of Ghanaians.