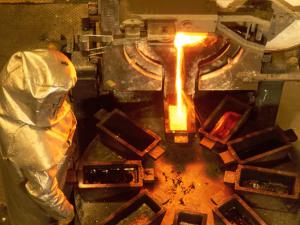 Government has firmed up plans to establish a major gold refinery plant by the end of this year, enabling Ghana to add value to about two-thirds of gold produced in the country and also boost earnings from gold production, B&FT has been told.

The gold refinery, which will be the first state-backed refinery in the minerals sector, is intended to be run on a Public-Private Partnership model.

The proposed plant, which will be established within the airport enclave, is expected to refine approximately 100 tonnes of gold per annum when it begins full operations. Ghana’s annual gold production is approximately 130-140 tonnes.

“I am confident that before close of the year a major refinery will be established at the airport.Strategic plans are underway to set up a major gold refinery,” Chief Executive Officer of the Minerals Commission, Dr. Toni Aubynn, told B&FT in an interview.

He added: “We have created the enabling environment to attract investors and businesses. Refining is business and the businessmen have decided to build it. This means they have done their feasibility studies to ensure its viability.

“For us at the Commission we promote and regulate, and we think the sentiment is that Ghanaians should have a refinery. I have spoken with these investors and they are talking about having a refinery that can refine about 100 tonnes annually.”

Dr. Aubynn explained that government is expected to make an official pronouncement on development of the proposed project by next month.

He explained that most refineries are established closed to the airport for easy transportation.
Minister of Lands and Natural Resource, Nii Osah Mills, in a recent interview confirmed that Ghana needs to have a major gold refinery as there are plans to see how that can be put together — but they remain plans at this stage, they have not been firmed-up or operationised.

Government last year announced its readiness to partner any investor to help establish a gold refinery plant in a bid to add value to the country’s gold.

Owing to the fluctuation of global gold prices, the establishment will enable the country to maximise revenue from the gold.

Ghana, the second-highest gold producing country in Africa after South Africa, has attracted major multinational mining companies including Newmont Mining Corporation, Gold Fields Limited, AngloGold Ashanti, and Golden Star Resources among others. Artisanal gold mining is believed to have started as far back in the 14th century.

These companies export the raw metal for processing overseas due to lack of an in-country refinery.
Currently, Asap Vasa Company Limited — a multi-million dollar high-capacity refinery plant — is the only major gold refinery plant in the country, operating and refining 100 kilogrammes of gold daily into granules, coins and bars, and it is owned by four young Ghanaian entrepreneurs.

The refinery purchases all of its raw gold from licenced small-scale miners and refines it to international quality standard of 99.9% fineness for the local and international gold markets.