Agribusiness company to invest $5m in agriculture, factories in Aveyime

Agribusiness company to invest $5m in agriculture, factories in Aveyime 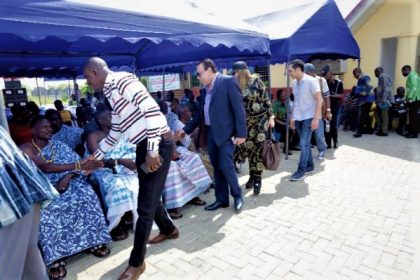 An Agribusiness company, Techno Bicon Agriculture Limited, is to invest over $5 million in agriculture, including establishing factories at Aveyime in the North Tongu District in the Volta Region.
Techno Bicon, which is a subsidiary of Euroget Group of companies, together with Maryna Agriculture Limited, specialists in agriculture and livestock production, has jointly acquired 11,000 acres of land at a proportion of 8000 acres to 3000 acres, respectively, to be used for the cultivation of crops such as cashew, maize, rice and castor oil.

The multi-million project will also see the setting up of processing factories to add value to the local products.

It will also produce finished and semi-finished goods for domestic consumption and for export.

Additionally, the companies have committed resources into infrastructure such as the building of a hospital, schools and solar energy to improve upon the lives of residents of the host communities.

A stakeholders’ engagement was held last Tuesday at the North Tongu District Assembly to announce the allocation of the land to the companies for work to begin.

Officials from the Lands Commission, the Volta Regional Directorate of the Ministry of Food and Agriculture and other heads of government agencies were also present.

Others included the chiefs and people of the Mepe and Battor Traditional areas, as well as the assembly members of the North Tongu District Assembly.

Dr Said explained that the decision by the Euroget Group and its subsidiary to invest in the project was to support the Planting For Food And Jobs (PFJ) and the one district, one factory (1D1F) polices by the government.

“We are going to apply modern technology on these 11,000 acres of land to plant rice, cashew, maize and also set up factories that will help create employment for the youth to open up the local communities for development in line with the government’s agenda to boost agriculture and industrialisation.

For his part, Mr Arku said that the project had come at an opportune time, especially when the government was working towards establishing factories in all parts of the country.